The biggest contradiction for me though is the isolation that I start to crave and feel when the best thing for me is to be around other people. I wouldn’t ever class myself as a people person and I don’t have a particularly wide group of friends but I do enjoy time with my friends and those close to me. One of the signs that the black cloud is approaching is that I start feeling like I want to withdraw from the world, roll up in a ball and hide somewhere. If I’m in bed, I don’t want to get out, I just want to pull the covers over my head and hide. If I’m at work, I just want to hide under my desk and hope that the dark cloud clears. At times like this it’s a struggle to be around anyone, it doesn’t matter who they are. The irony is that the thing that I am craving the most is probably the worst thing for me! 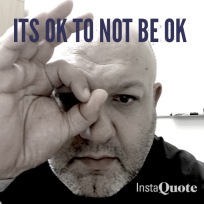 When the black cloud crashes in, one of the worst things that I can do is start spending more time on my own. It always seems like the sensible option as your mind starts working overtime. Why would anyone want to spend time with me when I’m like this? I don’t want to be a burden. I don’t want anyone to worry about me. The ultimate contradiction though is the thought that I’d be better off with some time to think everything through.

Why is this such a contradiction? In my case, it’s because when my mind has started to race like that, the last thing I need is time to think. I need a distraction, someone or something to occupy my thoughts so that I’m not focusing on myself or my illness. Time to think means time to dwell on what is wrong, time to think about what else could go wrong, time to wonder how I ended up like this and how I can escape my thoughts and feelings. You often wonder why you should feel like this when you have so many things to be grateful for and others have it far worse than you. The time to think just makes these thoughts worse as they seem to be amplified by the time and silence. The more time you get to yourself, the worse it gets and the harder it is to get out of it. You know that being around people would help but rational though is normally the furthest thing from your mind.

When I find myself in this position, it is hard to get back out. It is a battle against what comes naturally and it can be both physically and mentally exhausting. It is hard to force yourself to do things when you don’t want to even when you know that is your best option. One of the biggest problems I find with suffering from depression is how tiring it is. This is particularly the case when I feel like something is coming. It’s hard to express just how that feels li. As you start to fight it, try and make sure that you are doing the right things it has the tendency to wear you down both mentally and physically. It can seem like it is taking up all of your energy to keep the fight going. Hopefully as I am more able to see the signs of an episode coming, it doesn’t make it any easier but time and experience should help. The important thing is to not give in. The events that I’ve completed over the last couple of years have pushed me to my limits so I know how strong I can be which makes me even more determined to fight this and never give up.

time or who you think has been trying to withdraw recently, try and get in touch with them. If you can let them know that you are thinking of them or are there for a chat if they need you that could make all the difference. That might be just what they wanted to hear and could either initiate a conversation or at least reassure them that they haven’t been forgotten and that someone cares. If that doesn’t work then you can always point them in the direction of the Resources section of the website that has some links to groups that can help.

No one should go through this alone and having support and support mechanisms in place can make all the difference. Mental illness is slowing making its way out of the shadows but it is still an awkward thing for people to talk about. Together we can all help to break the stigma so that people don’t feel worried about discussing their mental health. It was never going to be easy and even though I’ve made a real effort to be more open and talk about it since Dan’s passing. It’s never as easy as it should be as you often feel very vulnerable when you open your feelings up. I’m very grateful for having some wonderful people around me who make it that bit easier for me to talk about it.