It was time to head home after the end of another working week. I walked across the car park to my car and got in. As I settled into the seat, I checked my emails to find that I had one from the Ten Club (the Pearl Jam fan club). I opened it, more in hope than expectation, to find that I had got two tickets for the upcoming concert in Leeds! I had good seats to see one of my favourite bands in the new arena in my hometown. The fact that I had seen them numerous times before only heightened the excitement. The next part I will always remember, even though it didn’t seem that memorable at the time. I rang Dan to break the news to him that we had the tickets. He sounded excited at the prospect of seeing them again and we were both looking forward to another great night of music and reminiscing. 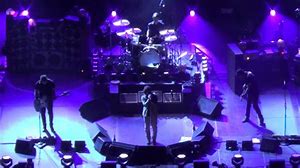 We had first seen Pearl Jam together in Manchester back in 2000. It was a great night when Dan, Emma (Dan’s sister), Brenda (Dan’s mum), Jarrod (Emma’s now husband) and I crammed into Dan’s mum’s car and headed over the M62 to Manchester. As we made our way over to the dark side and over the highest motorway point in the UK, we had our favourite Pearl Jam songs blasting out on the stereo. We were all waiting in anticipation as the support band started in the MEN Arena (as it was then) The anticipation was soon surpassed by embarrassment as the Vandals bass player decided to strip off towards the end of their set, not great when you’re sat with your friends mum! Thankfully that didn’t last too long and it was on the main event. As always, they put on a fantastic show and we both got to hear our favourite songs live in the flesh. We were all on our feet the whole way through despite being in the seats as we rocked away to classics like Given To Fly, Even Flow and Daughter. In the first encore they played probably my favourite Pearl Jam song – Black, along with State Of Love And Trust and a cover of Neil Young’s F@#kin’ Up. The second encore finished with Yellow Ledbetter and the journey home was filled with reliving the highs and discussing our favourite moments.

In 2014 we were going to get to relive all of that again and we couldn’t wait. There was nothing in the phone call that suggested anything was wrong or that we wouldn’t both be there for the concert. That phone call turned out to be the last time I spoke to Dan before he took his life. It was only two days later

when he lost his fight with anxiety and depression. There was nothing in his voice or what he said that would have made me think that was going to happen. He sounded happy and was excited by the prospect of going to the gig and reliving our youth again. When I had asked how he was, he said that he was ok which I never thought anymore of. We had spoken about mental health before and Dan had been helpful in getting some of my problems out. He had also made some suggestions that I’m still grateful for today, like trying blogging to get my feelings out, having a look at the Blurt Foundation and pointing me in the direction of Paul Brook’s amazing Dippyman blog. Looking back, it feels like I should have done more on that call even if it was just to tell him how much I loved him or what a great friend he was. I’ll never know whether that would have made any difference, but I’ll always wish that I had tried. There will always be a part of me that thinks I should have done more for him and time isn’t making that go away.

The one thing that I can do now is honour the promise I made at his funeral which was to do all I can to try and help break the stigma that surrounds mental illness by being honest about my own thoughts and feelings. I also wanted to try and help people understand what it feels like and for those who are suffering to know that they are not alone in feeling like this. This was how the year of challenges to raise money and awareness through Do It For Dan came about and then developed into the Dan Rhodes Foundation. It hasn’t been all plain sailing and as I’ve had my own ups and downs along the way, it has been hard and there have been times when I have wanted to give up. When I do feel like giving up, I take myself back to that promise and keep pushing on. There are times when I have to do less than I would like but the important thing is to keep going.

For those of you who didn’t know Dan, he was an amazing person. He was kind, considerate, funny, talented but couldn’t dance and he always made me want to be a better man. He loved Dad Jokes and would help anyone with anything. He left an impression on everyone he met, and my life hasn’t been the same since he passed. There isn’t a day that goes by without me thinking of him and even though there is a hole left behind that cannot be filled, I still have the memories of all the good times we had together. There is still part of him that lives on as we named Daniel after him and it’s still good to see his parents (Barry and Brenda) even though there is the sadness that he isn’t there to share it. I would have done anything for Dan and my other friends so I just wish that I could have done something so he could have seen the triplets grow up.

The 8th July was the 5-year anniversary of the Pearl Jam gig in Leeds and I listened to the recording of the show which brought the memories flooding back. There was a time when I wouldn’t have done that and would have tried to suppress the feelings and deny their existence but it’s so much more freeing to let them out. It was an emotional night back in 2014 and those emotions are still the same now.

On Sunday 14 July, I will be taking on York Triathlon to try and raise some money and awareness in Dan’s memory when I’ll be swimming 400m, cycling 18km and running 5km. Even though my training hasn’t been optimal and, as you’ll know if you’ve read some of the updates, I’ve been struggling with a back injury, I will get through it even if I have to crawl the whole way around. Please have a look at my sponsor page if you can and if you could share it with your friends that would be amazing. I’m just over halfway to my target and as the company I work for will double match any funds raised it will make a big difference. Huge thanks to all the wonderful people who have sponsored me so far and for all those people who help support me – I love you all.