This wasn’t going to my first rodeo. I’d done a triathlon before (albeit a while ago) but as Sunday 14 July was getting closer, it was making me more and more anxious. Training had started well, and I was making good progress but then my advancing years started to catch up with me. It started as a bit of an ache but then a couple of weeks before the big day, my back gave out. A training run ended with me sat on the roadside as I was struggling to walk. Over the time I had left, running took a back seat and I concentrated on taking the pressure off my back by spending my training time swimming and cycling.

I didn’t sleep that well on Saturday night as the anxiety was taking over. Even when I did the year of challenges when I first started raising awareness in Dan’s memory, I had always felt like I would complete the event no matter what was lying in wait. Tough Mudder, OCRs, cycling from Leeds to Hull, swimming 5k and rowing the distance of the English Channel were all taken on without a second thought and there was never any doubt in my mind that I would finish them. This was different, I don’t normally suffer from anxiety around events, but Saturday night was a battle in my own head. My back problems had planted the seed of doubt and that was growing into a forest. I tried to relax but just couldn’t switch off the negative thoughts so tried to get an early night so that I’d be as rested as I could be.

Sunday morning soon arrived, and it was time to pack the car and get ready. I didn’t feel like myself and was starting to wonder what I was doing. I didn’t want to let anyone down from the sponsors, all the people who had helped and supported me and most of all Dan, so I tried to focus on one small step at a time. I packed my kit, a change of clothes and my bike, gave everyone a hug and kissed the kid’s goodbye before setting off for York Sport Village.

I parked the car, unpacked my bike and kit and made my way to the start trying to relax as I ambled down. As I stopped to have a look at the transition area, I heard the announcer say, “This will be a good time as the Team GB athletes cross the line!” Great, I’m up against professional athletes as well – not what I wanted to hear given my anxious state. I tried to rationalise it as I wasn’t here to break a PB or challenge for a medal but to finish the course. That is what I was here to do and that is what was going to happen no matter what.

I racked my bike and set my kit out ready for getting changed after each leg so that I could make the transitions as smooth as possible. It was then time to grab my googles, dispense with my t-shirt and get to the pool for the pre-race briefing. The self-doubt was now replaced by self-consciousness as I walked around the building to get to the pool. I’ve never been that comfortable with my shirt off and this was no exception. It didn’t help that I saw the kids headteacher just after I’d put my pink swim cap on which really finished off the look. After a quick briefing of what we needed to do during the race, we had to line up in number order for the start, so I found my place between 316 and 318.

The swim leg was 400m (16 lengths) in 4 length sections where you then moved across so that you finished at the other side of the pool. I started to feel better watching the people swimming as I wasn’t going to be the only one doing breaststroke. That made me feel more at ease and it wasn’t long until my number was called, and I climbed down the steps into the warm water of the pool. The countdown began and it was ‘go’ time. I swam what felt like my usual pace but by the end I had caught up with the person who set off before me and when I later checked my time, I found that I had swam faster than any of my training runs. I climbed out of the pool at the end of my 16 lengths and left the building towards my bike and the next of the day’s challenges.

After putting on my t-shirt, helmet and cycling shoes, I pushed my bike through the transition area and up to the start of the bike course. As soon as I passed the line, I flicked my leg over the frame and clipped myself in for the next 18km (6 laps of the course). The bike course was fairly flat and had a few technical sections as well as a couple of annoying rises. The bike leg went well but being of a Clydesdale build the kicks up in the road were not helping my energy levels. I don’t have a great relationship with gravity especially what it tells me via the bathroom scales. The extra push needed to get to the helpful sign that told you to slow down (if I had done, I would have fallen off!) was taking its toll on my legs but also my back due to the extra power needed. The swim leg hadn’t had any real effect on my back but by the time I dismounted from the bike leg and wheeled my way back into transition, I was starting to feel it.

Back in transition, I racked my bike, took off my helmet and cycling shoes and put on my ‘running’ shoes. As I made my way out and on to the running course 5km (4 laps of the course) looked like a long way. I had been making steady progress up to this point but now the challenge was really starting. I had it in my mind that I would start with walking/running intervals and see how it went but that was soon to change.

One of my favourite Nine Inch Nails songs (which was also emotionally covered by Johnny Cash which you should check out if you haven’t heard it) starts with the lines;

Those lines sum up how I felt through the running section of the triathlon. My back was cramping up through the first 500m and it was getting more difficult to walk the further I went. It crossed my mind that I should stop and try and stretch it out, but I wasn’t sure whether I would be able to get moving again so I had to keep moving. I kept focussing on the pain and the fact that if I kept moving it would all be over soon. 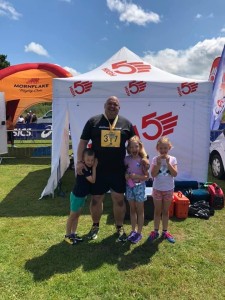 There was lots of encouragement from my family, spectators and other competitors who kept me going on what felt like a marathon. As I set out on my second lap, the parallels struck me between what I was going through and what it is like to live with mental illness. From the outside everything looked fine, I was putting on a smile and keeping moving but what all the people passing me didn’t know was that things weren’t quite as they seemed due to my back injury. With mental illness you also put up a front and convince people that everything is alright, and you keep trying to battle through it. I’m sure there must have been other people there who were thinking that I should get running or try a bit harder, but I was giving everything I had to keep going. You should try not judge a situation just by what you see as you don’t know the story behind it and in the case of mental illness, you will have no idea what a person might be going through. The thoughtfulness of some people get you through and the good thing about events like this is the comradery between competitors as you are all trying to get to the same result, it just happens at different speeds. 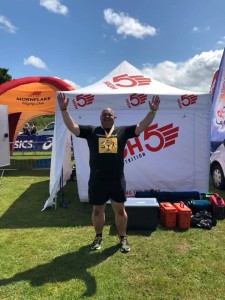 As the 4 laps finally came to a close, my triathlon was over. It hadn’t gone quite how I would have liked but that doesn’t matter as I finished it. Was it worth it? Definitely. Huge thanks to the people who generously sponsored me and the matching from the Matthew Good Foundation. Would I do it again? Absolutely and kids also want to take part next year which will make it a family weekend and hopefully I’ll be a bit quicker around the course. Before then there are other challenges to take on, so training starts again straight away. The whole event was well worth taking part in and was well organised from start to finish so if you’re thinking about trying something new, why not give it a go?

Thanks again to all the people who have helped, supported and sponsored me – I couldn’t have done it without you. Now on to the next challenge!